Here is an overview of the different black materials used in vintage and antique jewellery.

Onyx is a variety of chalcedony. For more information, see here.

Berlin iron is made from cast iron and delicate wire pieces. For more information, see here.

Enamel is fired ground glass. In theory, almost all methods of enamelling can produce black items but generally it is en grisaille, niello and taille d’epargne which are known for being worked in black. (Technically, niello work is not true enamel but is usually classified as such)

Gutta Percha is a type of rubber derived from the gum of Asian trees. It is usually molded rather than carved and mould lines can be visible when examined carefully. When rubbed vigorously, it gives off an acrid, rubber smell. It is very flexible and durable and can produce a wide variety of jewellery items. Upon close inspection, you can see that it is actually brownish-black. Popular through the mid and late Victorian era, it made its debut at the Great Exhibition of 1851. 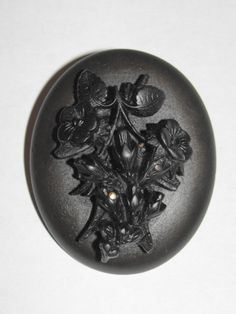 Vulcanite is vulcanised India rubber formed using sulphur. It was first patented in 1844 by Charles Goodyear. Vulcanite is almost always moulded, as opposed to carved. It is actually white and can be dyed to produce a variety of colours, often in imitation of coral and tortoiseshell. Most commonly, however, it was dyed black and used in mourning jewellery as a substitute for jet. Over time, black vulcanite usually turns dark brown. It is lightweight and warm to the touch. It will develop a sheen with polishing but is never as glossy as jet. Like jet, it will leave a brown streak on porcelain or unglazed tile.

French jet is black or very dark red glass. It can sometimes be backed with foil or attached to a metal setting but is most commonly found as beaded necklaces. It first made its appearance in the early part of the 19th century but came into its own in the 1860s when the techniques to produce it were perfected. It was produced in France, Germany, Austria, England and what is now the Czech Republic. It is cold to the touch and heavier than jet and has a distinctive glitter. Sometimes it is roughly moulded or carved to further simulate jet. Upon close examination, it can often be identified by tiny chips. If you gently tap it against your teeth, you should be able to identify the chink as glass.

Like jet, bog oak is fossilised wood. It is usually mined from the bogs of Ireland and is not necessarily oak but can be fir, yew or pine. Similar in feel to jet, it is lightweight and warm to the touch but generally has a more matte finish. It was used from the early 1800s and grew in popularity after 1852 when techniques involving heat and pressure were invented to mold it and create detail. It can be carved or moulded. It is generally found in mourning jewellery as a substitute for jet but can also often be found with Irish motifs in the form of souvenir jewellery.

With age, tortoiseshell can darken enough to appear black. See here and here.

© Pippa Gaubert Bear and Elder and Bloom LLC, 2017. Unauthorized use and/or duplication of this material without express and written permission from this blog’s author and/or owner is strictly prohibited. Excerpts and links may be used, provided that full and clear credit is given to Pippa Bear and Elder and Bloom with appropriate and specific direction to the original content.
January 12, 2013 By elderandbloom in Pique Tags: antique jewelry, Pique, tortoiseshell, Victorian Leave a comment 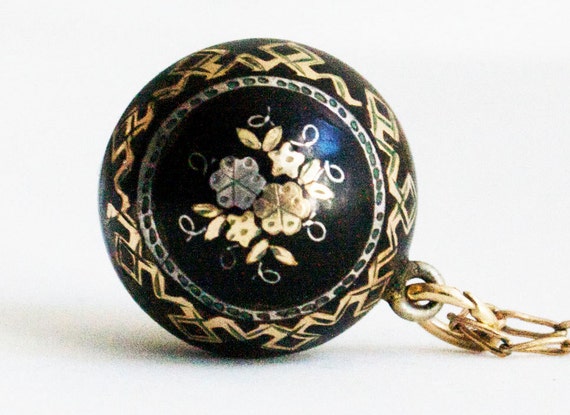 Piqué work was a method of inlaying gold, silver and sometimes mother of pearl into tortoiseshell and other materials to create truly stunning effects.   Piqué originated in Italy in the mid 1600s and then spread to France where it was further developed as a technique.  The English also enthusiastically adopted the method and English piqué jewelry is the most prevalent.  Jewelry was first made with this technique in the early 1800s and piqué jewelry peaked in popularity in the 1850s to 1880s.  It was considered appropriate for mourning because of the dark colors. It quite abruptly ceased to be made almost entirely by 1885. Earlier designs were much more naturalistic and softer; later designs became more geometric as production methods became more mechanized.

Generally, pure gold and silver were used as the metals.  It is quite difficult to metal test such small amounts of metal but it can generally be assumed that if you have a piece of genuine tortoiseshell and the design is well executed that the gold or silver is high carat.  Sometimes brass was also used. In order to embed the metals, the tortoiseshell was heated up first which caused it to expand and soften whilst the metals were worked in.

There were two types of piqué work: piqué point, in which gold or silver pins are driven into the tortoiseshell or other material to create the design and piqué posé, in which the design is engraved and then threads or small pieces of gold and silver are used to fill it in. You will sometimes hear piqué referred to as piqué d’or but this is only correct when referring to gold piqué work. Two major piqué artisans were:  Laurentini and Charles Boulle.

Lot Description ‘A Victorian tortoise-shell and citrine bangle.  The tapered tortoise-shell bangle of half hoop design, set to the front with floral piqué decoration and central oval citrine, circa 1860.’

Piqué work was of course worked into different materials other than tortoiseshell, particularly celluloid which can appear quite similar to the untrained eye.  One method for testing for tortoiseshell is to burn a very small place with a hot pin; if you smell burning hair it is most likely to be tortoiseshell.  Another test to see if it is celluloid is to run it under very hot water; if it gives off a plastic smell it is celluloid.  However, the absolute best way is to handle enough pieces so that you know the difference by eye.  Another base material I have seen is wood.  The other materials sometimes used were elephant ivory and horn although less commonly for jewelry. 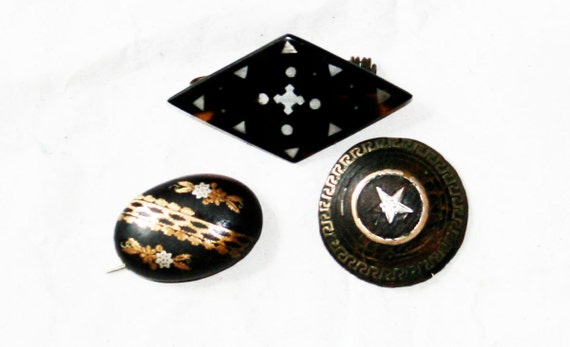 Today, piqué jewelry is considered extremely collectible.  It can never be made again as of course tortoises and elephants are protected species.  Available Piqué jewelry is therefore only going to become rarer. Piqué jewelry is truly marvelous to behold, very wearable and absolutely beautiful.