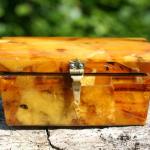 As you may have noticed, I absolutely love real vintage and antique amber.

If you do too, you may enjoy this article.

There are some lovely Art Deco amber treasures in the Elder and Bloom Etsy shop right now. 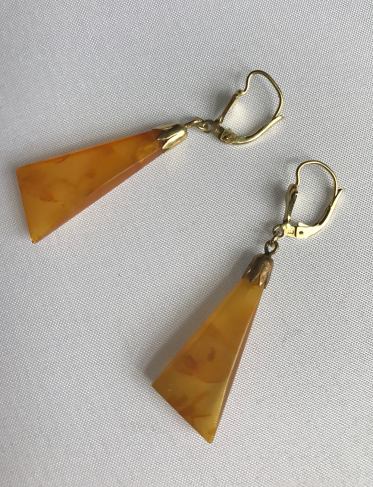 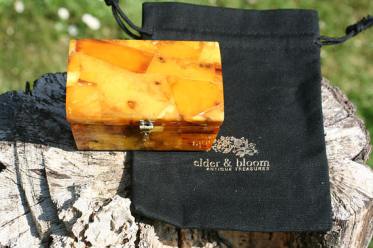 The wide variety and beauty of the natural materials used in vintage and antique jewellery is staggering. It seems jewellery designers never cease in their inventiveness. Here is a list which I believe is comprehensive or almost comprehensive (there is bound to be something I have left out).

I have excluded metal as that seems to deserve it’s own separate list.

Copyright © 2017 by Pippa Gaubert Bear and Elder & Bloom. Unauthorized use and/or duplication of this material without express and written permission from this website’s author and/or owner is strictly prohibited. Excerpts and links may be used, provided that full and clear credit is given to Pippa Bear and Elder & Bloom with appropriate and specific direction to the original content.

Here we are, trapped in the amber of the moment. There is no why.
Kurt Vonnegut

Amber is the fossilized resin of a variety of ancient conifer trees from approximately 25 to 60 million years ago. Originating primarily from the Baltic region, these deposits of resin found their way to the surface and to the sea, from where they found their way across the world to distant shores.  What could be a more romantic origin for a precious material to use in jewelry? Amber is beautiful, soulful, mysterious and full of light. Good amber, warmed in the hand, can emit a faint perfume of pine. Rather than shine, like gemstones, amber glows with an inner radiance.

Amber was particularly popular in jewelry from the 1890s -1917s.  By the 1920s, amber was the second only to diamonds in U.S. gem imports. Long, beaded necklaces of amber were popular throughout the Art Deco period. Inclusions were not considered desirable as they are today and often amber was treated to create clarity.

But every era has loved amber and for very good reason.  Amber is lightweight and can be carved, made into cabochons or faceted or made into beads. The color of amber varies from white to very pale yellow to brown and red and even black.  Blue and green amber is also possible, but not at all common. (‘Jet’ is sometimes referred to as ‘black amber’ but is of course not amber at all).

Amber is valued for its clarity. Today, the most valued and sought after amber is that with well preserved flora, feathers, fauna and insects. Fine greens and translucent reds are the most valuable.  Transparent, flawless, intense yellows are the most desired of the more usual colors.

Amber is known as one of the ‘organic gemstones’.

One way to evaluate the age of antique amber is to understand that amber darkens gradually with age, becoming reddish or brownish. (However, amber can be made to appear aged by immersing in salt water so this should not be the only criteria).

Amber is referred  in the following ways:

TRANSLUCENCE can be described as:

CLEAR – Highly transparent (the most sought after)

CLOUDY or BASTARD – The appearance of cloudy material is caused by a multitude of small bubbles. The clarity is sometimes increased by heating or by injecting with oils (sometimes colored oils).

FATTY or FLOHMIG – This type resembles goose fat and is full of tiny bubbles; however, it is not as opaque as cloudy amber.

FOAMY- An opaque, chalky amber. Will not take a polish.

BONE OR OSSEOUS –  contains many bubbles, white to brown in color, resembles bone or ivory. Doesn’t take a polish.

COLOR can be described as:

TYPES are described as:

Natural or raw Baltic amber – gemstone which has undergone mechanical treatment only.

Modified amber – gemstone subjected only to thermal or high-pressure treatment.

Reconstructed (pressed) amber – gemstone made of amber pieces pressed in high temperature and under high pressure. This is also called ‘amberoid’.  It can be stained to various colors, but the color distribution is generally uneven.

ORIGIN – amber is also described in the following ways:

Sea Amber – this is Amber found in the sea or shore. It is also referred to as “seastone” or “scoopstone.”

Pit Amber- This is mined. Most Baltic amber is mined

Amber comes from the following locations:

BALTIC AMBER is referred to as succinite.

It is the most likely to contain fauna and insects.

DOMINICAN REPUBLIC. This is the only place to produce a rare blue amber, which can appear yellow or blue depending on the light.

ROMANIA.  Roumanite amber is a dark yellow-brown and can even be black.

Copal is another substance that can be confused with amber; it is basically a younger amber.  To tell the difference between copal and amber, use a little bit of acetone.  Amber will have no response at all.  Copal also gets sticky when rubbed vigorously. Copal is also used as an incense as well as in jewelry.

Other substances that can be confused with amber are plastics, paste and glass. There are many fake ambers on the market as it seems amber is very easy to fake and modify.  People have even been known to add fake insects to real amber to increase value. There are many fake ambers with fake insects and fauna inside. Amber is static when rubbed vigorously and also will float in salty water.

Amber colored glass will often be referred simply to as ‘amber’. The word ‘amber’ also refers simply to the color that we are all familiar with.

Sources / Further reading (please look at the drop down menu above for my principal sources):